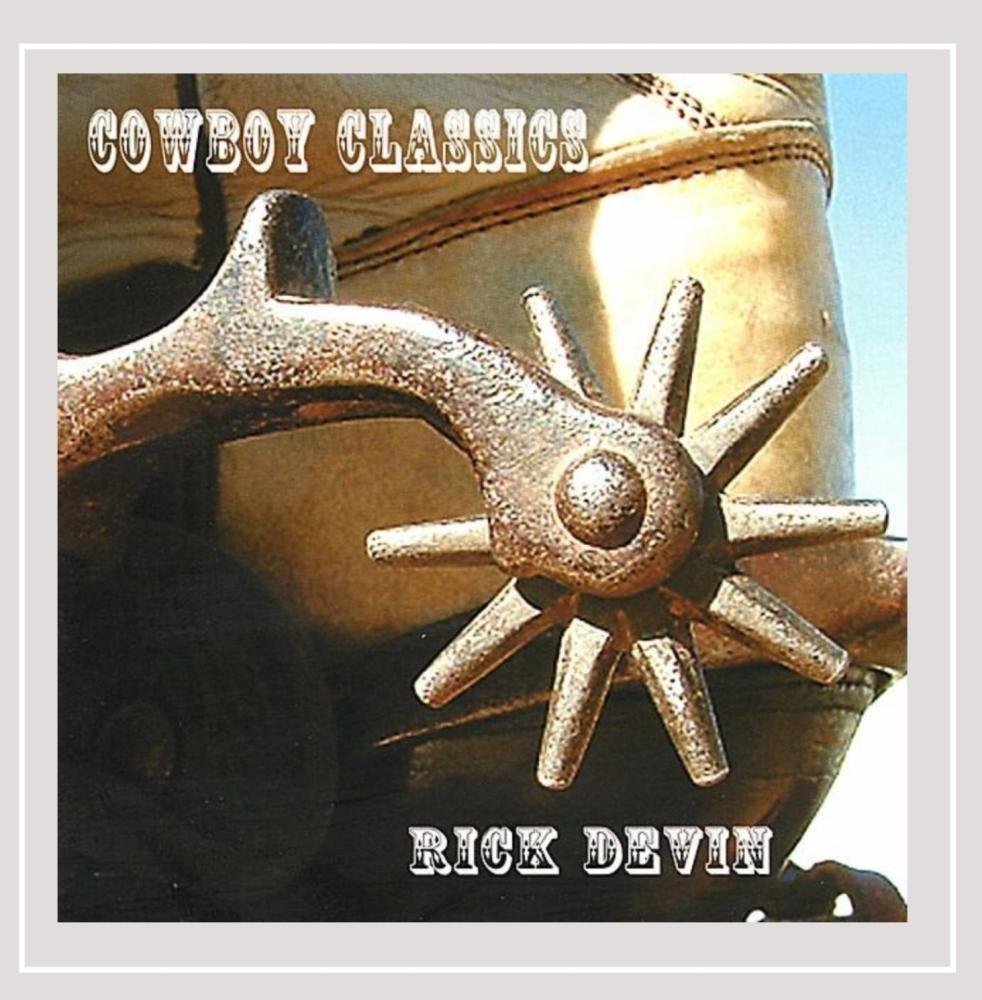 "I think that this is your finest piece of work. The others were good, but Rick, this is perfect! We are truly enjoying it. It frames your voice so well, and the recording couldn't be any better. These recordings are the closest thing to being in the same place with you. That is hard to capture for any artist, but I think it has been done. Your best work yet." --Jenny Mathis, San Luis Obispo, CA

"I am sitting here typing with your Cowboy Classics playing on my computer! I just received your CD with a post card tonight when I got home from work. I feel like you are here with us! What a great CD! Your voice brings back fond memories! You really have a wonderful voice and your music is great! I Love the Row of Doors CD as well! --Diane Munsell, Sandwich, MA

"I would like to thank you for the autographed Cowboy Classics CD that you sent to me. I'm really enjoying it and I'm listening to it as I write this email. I also congratulate you for the excellent Country Music. My family has a Ranch in Rio Bonito, where we have some excellent horses. If you ever want to go horseback riding or to spend a weekend there with your wife, please let me know and we can organize it. Once again thank you and best wishes" --Marcelo Cunha, Halliburton - KBR - Brazil, Macae, Rio de Janeiro, Brazil

Rick Devin continues to build a recorded legacy enriching our vision of the American West. In its tales of the day-to-day lives and emotions of those who lived it, his ballads paint a sweeping landscape of both the mind and heart, keeping alive the sights, sounds and feelings of this most American contribution to culture and art. Cowboy Music.

The quality of this cowboy balladeer's music stems from the fact that he is so much more than a singer. Rick Devin is perhaps one of the best purveyors of cowboy music in America today.

"span"A historian, composer and musicologist, someone well-versed in cowboy lore and musical traditions, Rick brings a rare complement of knowledge of and love for his craft. Mostly though, there is the soul of a poet; a man who has never succumbed to any temptation to present a glamorized or romanticized version of the West. Devin deals with the bad weather and petty motivation, with sadness, nostalgia and longing as parts of the landscape, like any other.

"span"Rick was exposed as a child to a vast cross-section of music from classical to jazz, and blues to western-swing, and pop to early rock. Many of the those influences enter his original music, as they did some of the music of the West. Devin was drawn to the cowboy life by the books of Will James and the Westerns of the silver screen. He taught himself guitar starting at age nine, and chased the rodeo and worked ranches in California and Nevada during his teens and Twenties. In 1980, he got a job as an actor/singer for Glen Campbells Christmas Special Television Show and he was to stick with music and cowboying, from then on. Rick started recording Radio Jingles and teaching guitar lessons in 1982. He also made his first record in 1982, My Favorites.

"span"Rick became the manager of the Sierra Meadows Pack Station in Mammoth Lakes, California and he would play acoustic sets during the Hayride Dinners. Often, special guests would accompany him, including Riders In The Sky, Johnny Western, and Sons Of The San Joaquin.

"span"Always yearning to ride new ranges of the American West, Rick ventured throughout the Sierras and Rocky Mountains, working as a cowboy, riding and strumming his guitar. When I asked Rick how he learned the classic western yodels, he painted for me, visual images of him riding alone into the High Sierra Mountains, with a pack string of six mules, to supply a drop camp in the backcountry. He chuckled, It was just the eight of us, my mare, my string and myself and they didnt seem to complain too much. I also learned to play the harmonica that summer. With an eight to twelve hour ride each day, I learned pretty quickly and my harp was easier to fit into my duster pocket than my guitar. It was then, the summer of 1984, and Ricks love of the cowboy lifestyle, that his music took on the classic, cowboy ballad style that we hear so clearly today.

"span"For nearly twenty years since that summer, Rick Devin continued to ride the ranges and sing the cowboy songs so close to his heart. Yet, his ranges and audiences had grown to a world wide status. He tells of a wide variety of rides and shows that he has shared through out North America, Europe and South America, some performing along side with many of musics greatest stars, an extensive list, like a whos who in Country and Western Music.

"span"Rick recorded and released Colorado Reflections in 1998, with an independent label, selling out his inventory at his cowboy shows. He then recorded Colorado Cowboy in the fall of 1999 at a guest ranch in Colorado with his band, The Eagle River Band, it was released in 2000 on the Red Cloud Records Label. Colorado Cowboy contains a collection of cowboy songs old and new, including Ricks smash hit single, Momma, Im A Cowboy. After much success and high accolades from the critics, Red Cloud Records released another recording in 2002, Row Of Doors . This CD seems to further cement Ricks place in music history as a solid fundamental per

Against The Current 10th Apr

ROCKET FROM THE CRYPT – RESCHEDULED 14th May

The Electric Ballroom is an iconic music venue at the heart of Camden Town’s bustling community and has been for 80 years.

It began as a busy Irish club playing host to a wide variety of performers including the likes of Jim Reeves. In the past decades, acts such as Sid Vicious, Madness, The Clash, Richard Ashcroft, Snow Patrol, The Killers, Stereophonics, U2, Phil Lynott, The Boomtown Rats, Joy Division, Red Hot Chilli Peppers, Public Enemy, Blur, Supergrass, Garbage and The Smiths have drawn huge crowds to the venue.

📢New Show Announcement📢 The Festive Edition of Shake will be back on 10th of Dec. Prepare for a night of your favou… twitter.com/i/web/status/1…12 hours ago